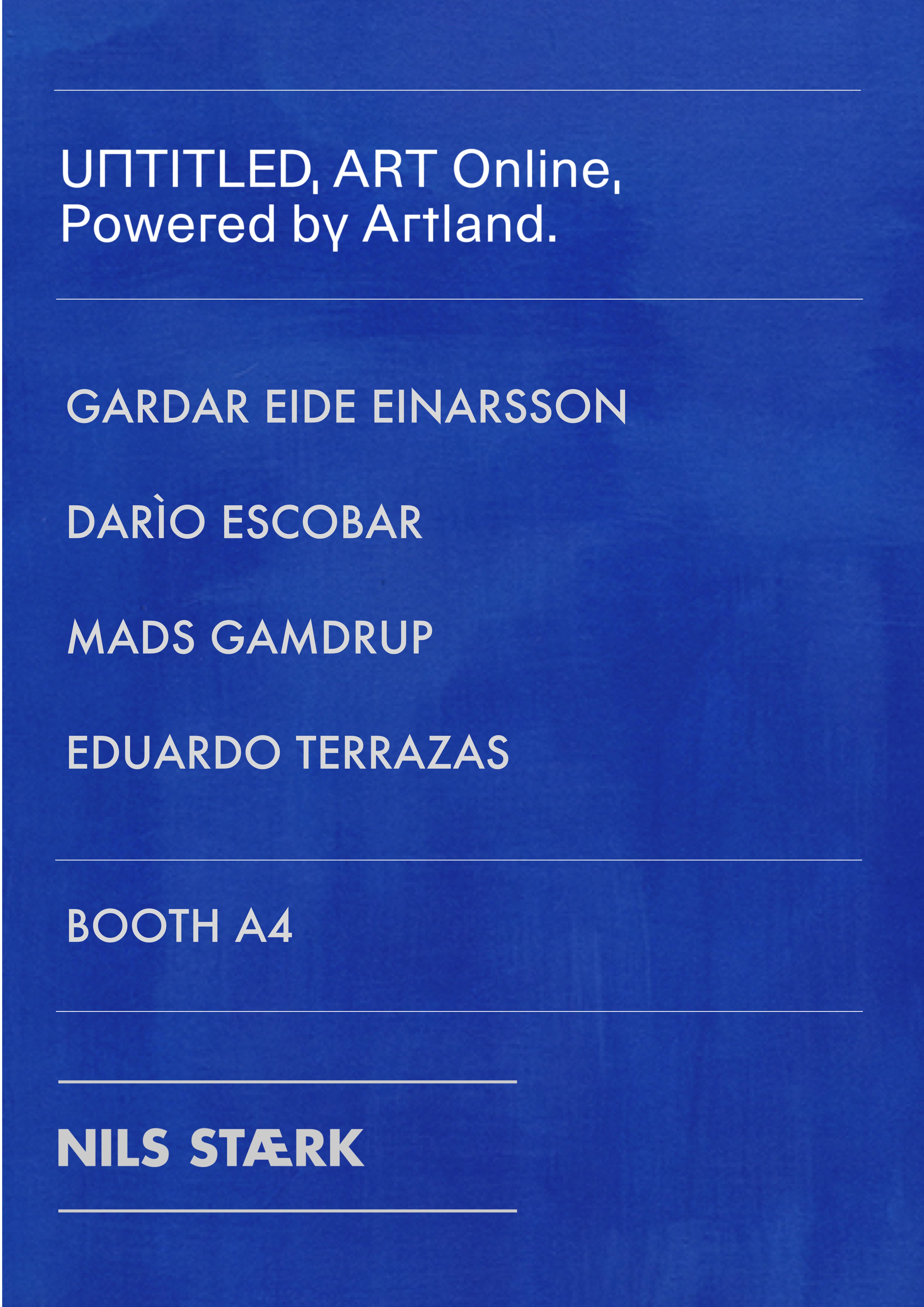 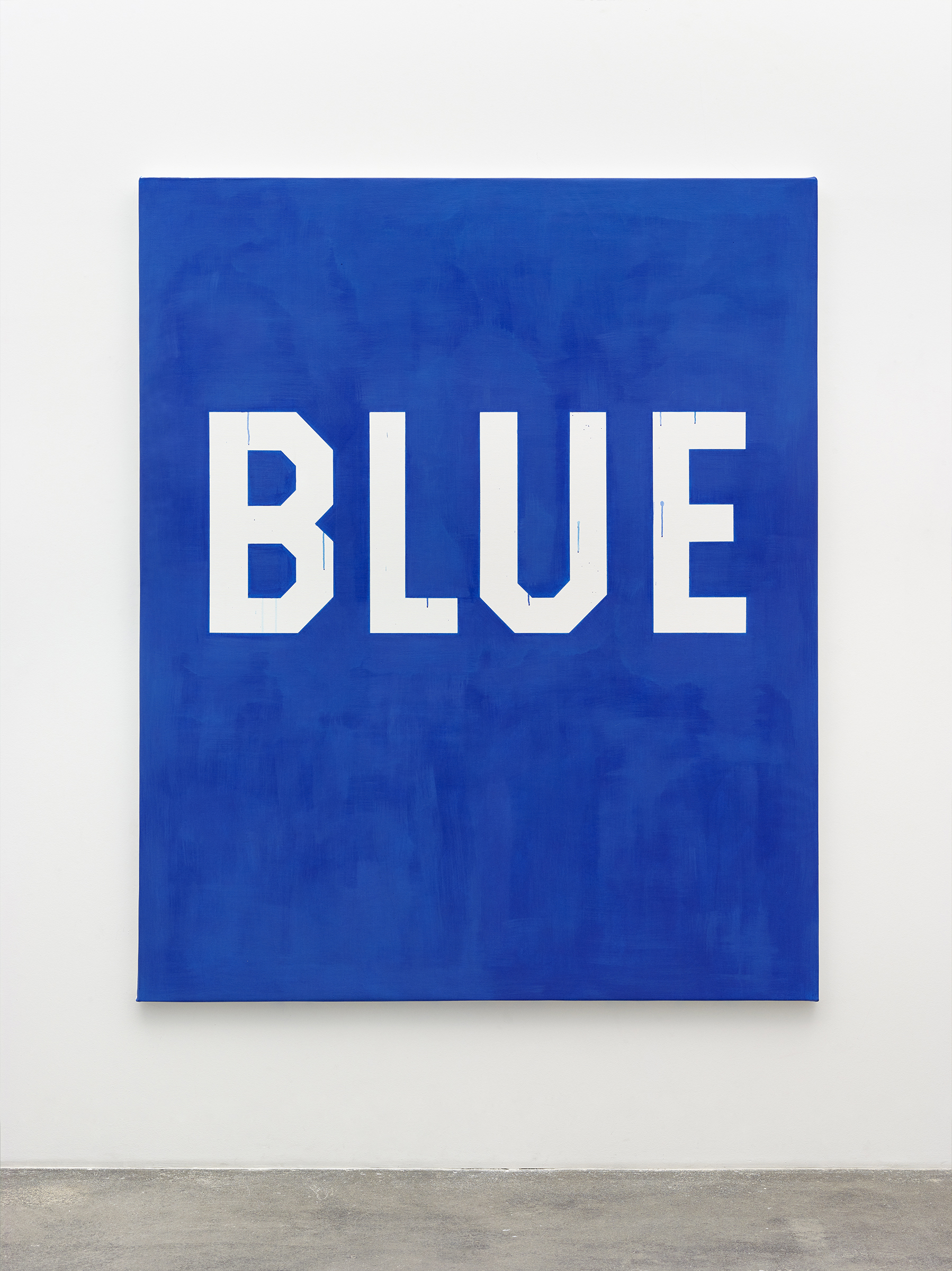 The exhibition brings together works by four artists of different generations, who developed their practices in connection to a relatively heterogeneous notion of abstraction. All artists dedicate themselves with consistency and discipline to the exploration of abstraction as both a formal and a referential idea. In doing so they form conceptually different and, in some cases, radical approaches that demonstrate the diversity of the geometric idiom. 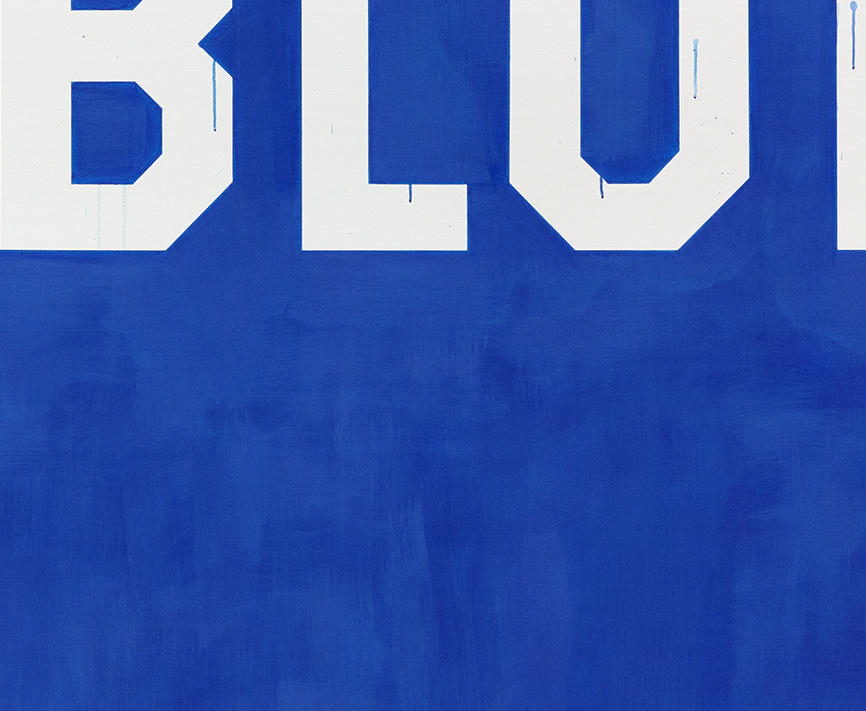 An important point of reference is the repetition of the color blue. In Gardar Eide Einarsson’s painting “The LAPD and the Battle to Redeem American Policing”, the seemingly narrow perceptual framework, however, reveals itself as one of extraordinary conceptual complexity. The conceptual approach is the pivotal point in Einarsson’s practice. The literal declaration conveys an abstract set of rules that resonate well with the tradition of new artistic departures. 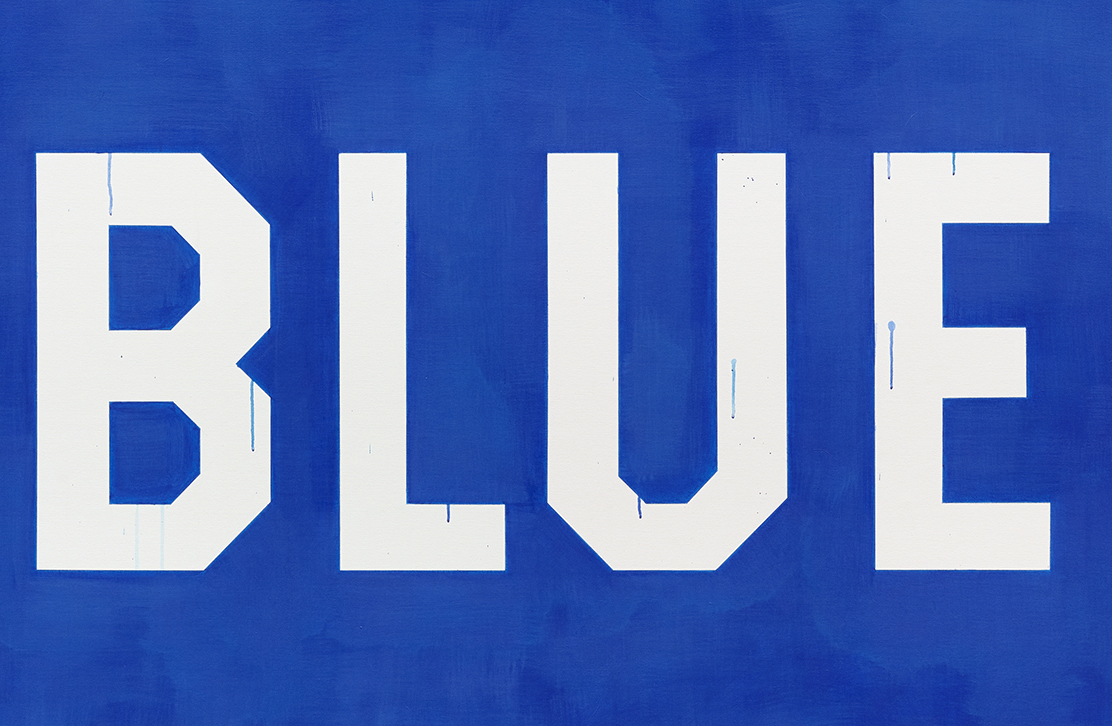 While Einarsson studies conceptual painting, Dario Escobar, in an equally conceptual practice of communicating through color, explores the language of space 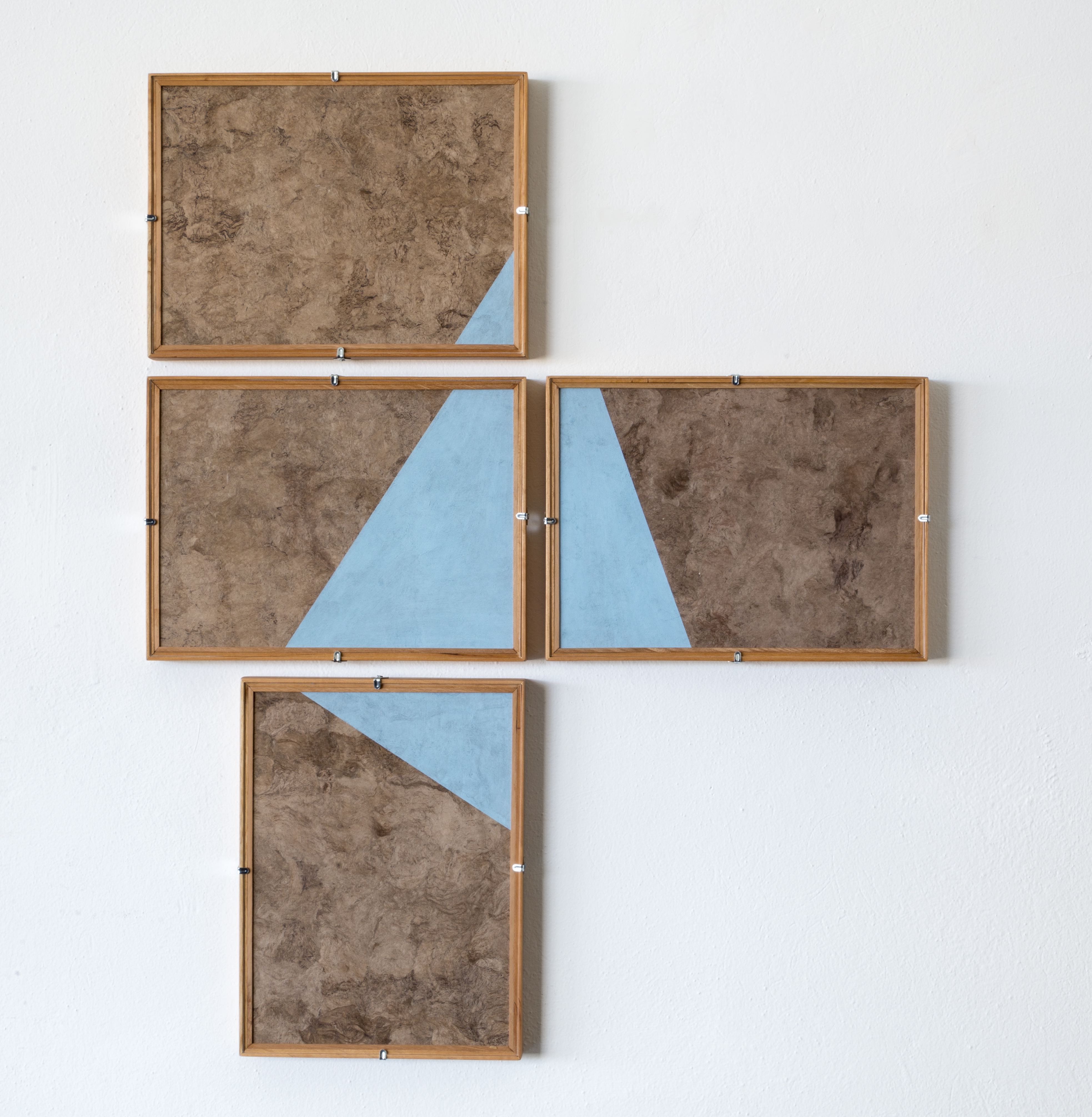 The Guatamalan artist Dario Escobar (b. 1971) works in various media: sculpture, installation, painting, and drawing. His work often makes use of the concept of the readymade, but the objects Escobar choose are always altered in some way or another.

The series Composition Azules make use of amate paper – a type of paper made out of bark from fig-trees and widely used and produced in Mesoamerica in pre-Columbian times, where it was both used for writing and in religious rituals. The paper used by Escobar is produced in Oaxaca, Mexico.

Maya blue is the name of the light blue color that has been used in painting across Mesoamerica. It’s only very resently that the color has become possible to recreate. 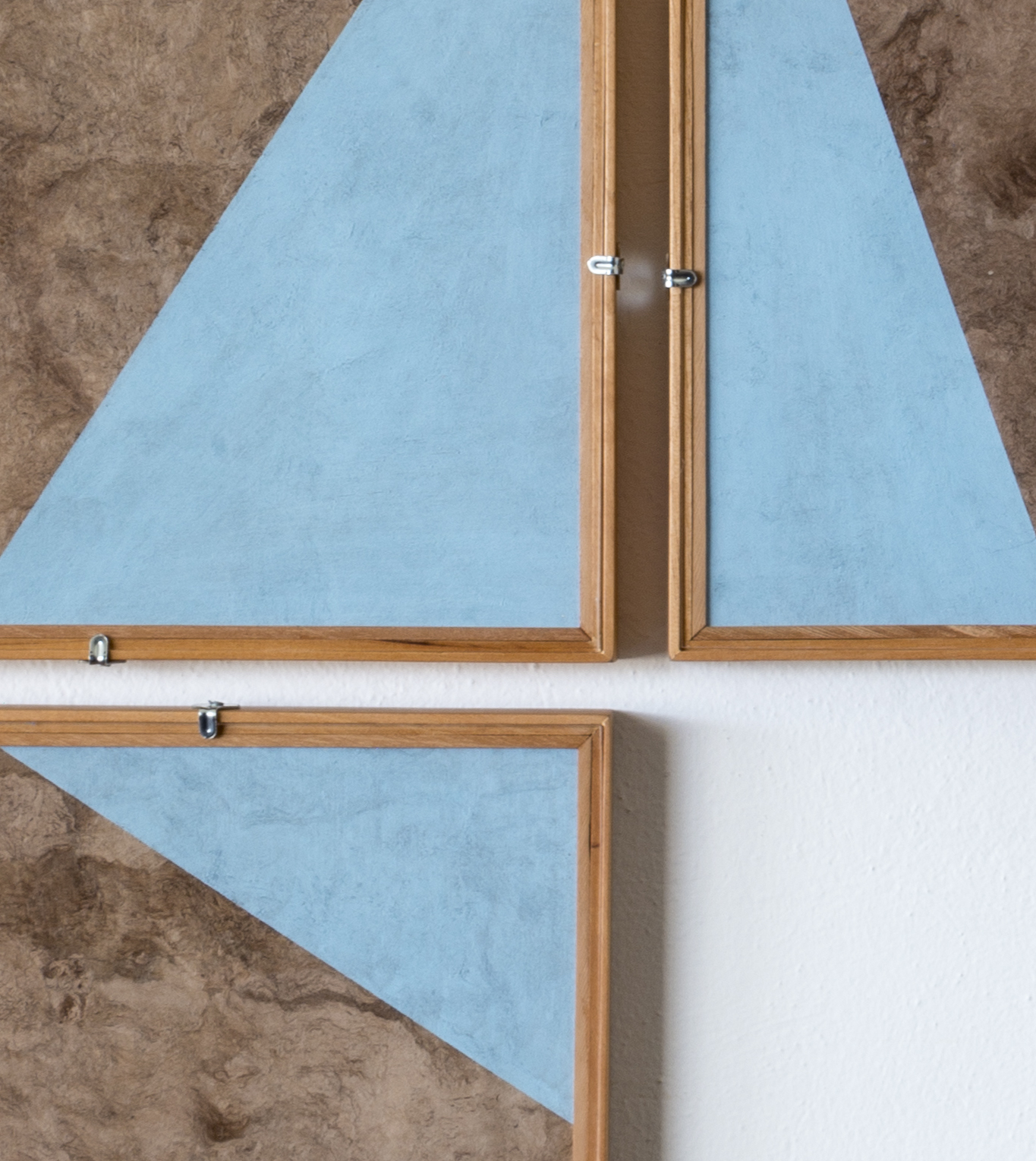 Ultimately, the various approaches in American minimalism in the 1960s were deeply concerned with space. This notion receives distinctive renderings in the paintings by artists such as Eduardo Terrazas and Mads Gamdrup, both of which are represented in the exhibition with diagrammatic works in dyed yarn and colored glass. The use of ‘other’ materials insists on another foreign space beside the pictorial one. Like in the merely conceptual approach by Einarsson and Escobar, the works in the exhibition continue the tradition of abstraction as a way to expand the field of painting. 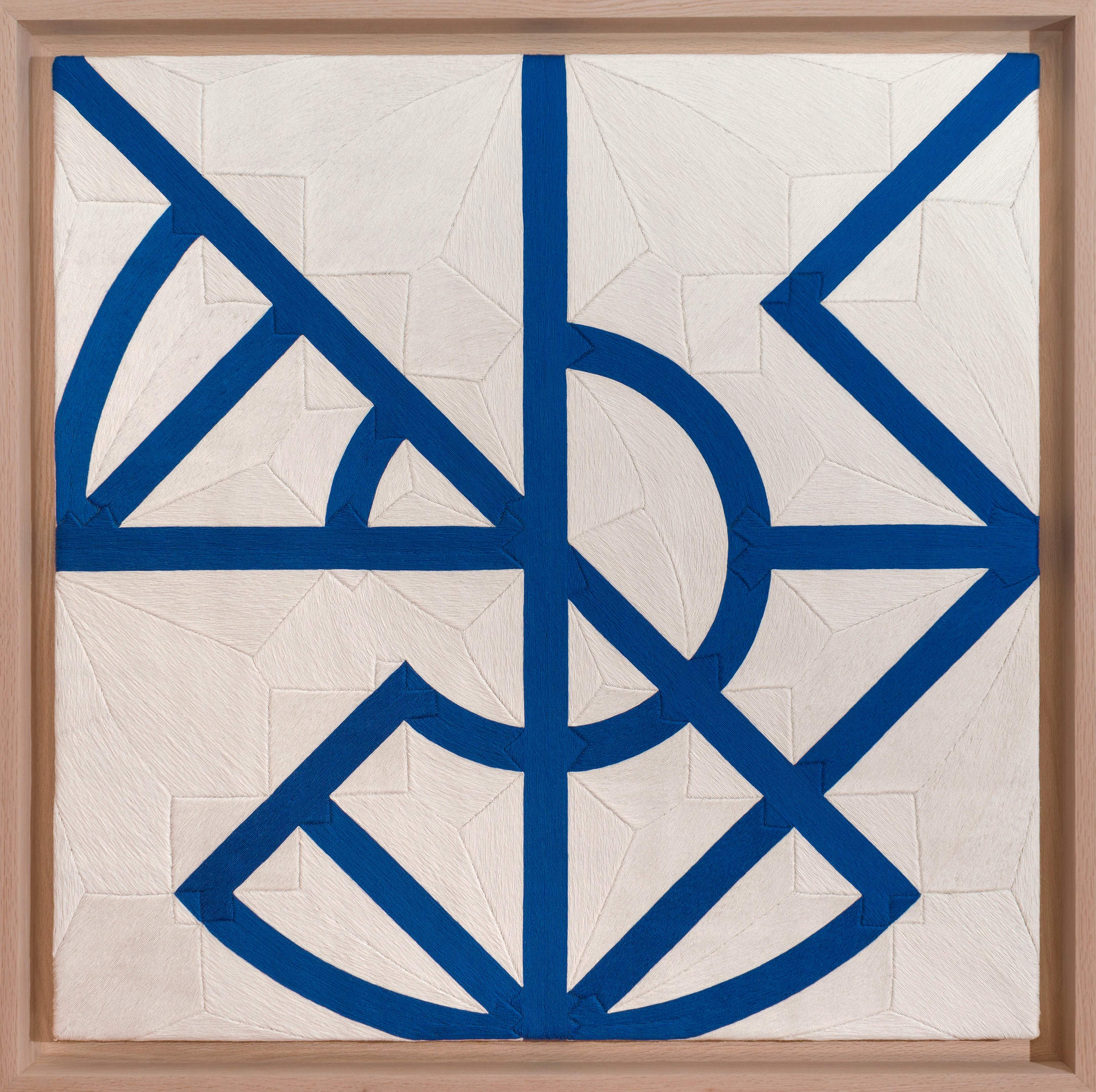 Eduardo Terrazas (1936) is a Mexican creator who has taken a genuine interest in studying and contemplating the complexity of our contemporary world. Spirit, beauty, order, and technique are the cornerstones that define his visual universe.

An architect by training, he obtains his Bachelor’s degree at UNAM Mexico, and then a Master’s, at Cornell University, New York. But his endeavors –for over fifty years- include an array of disciplines: design, architecture, urban and regional planning, visual arts and environmental issues, responding and reflecting creatively to our changing reality, proposing alternate methods of inhabiting our world, different forms to relate one another, new ways to portray and understand our cosmos.

Terrazas sees his transit through these disciplines, as different pathways that nevertheless run parallel, as resources to approach concerns that range from philosophy to science.

He is one of the few Mexicans who work with the geometric abstraction to establish a dialogue between the formal occidental aesthetics and the techniques of the indigenous craft.

He was the co-author of the Design and Identity Program Mexico’68, working for architect Pedro Ramírez Vázquez, President of the Organizing Committee of the Games of the XIX Olympiad in Mexico in 1968.

His first exhibition Tablas (1972 Palacio de Bellas Artes, Mexico) presents a series of compositions focused on basic forms, all of them produced with the Huichol technique (wool yarn on wooden board, covered with Campeche wax), a collaboration between Terrazas and the Huichol artisan Santos Motoaapohua de la Torre de Santiago.

His broad artistic production includes works as heterogeneous as Possibilities of a Structure (1974 - ), a pictorial investigation of the characteristics that allows a specific structure to be developed and transformed to the infinite.

From that time on, Terrazas has produced more than 20 different series like Exponential Growth, Organic Growth, The predicaments of mankind, Multiplications, Deconstruction of an Image, Everyday Museum, Imagen México, Traces, Universe, and Toscana, among others.

Terrazas creates images that serve as a testimony of his interest in thinking in an interdisciplinary way to establish visions of the future through a universal visual language. 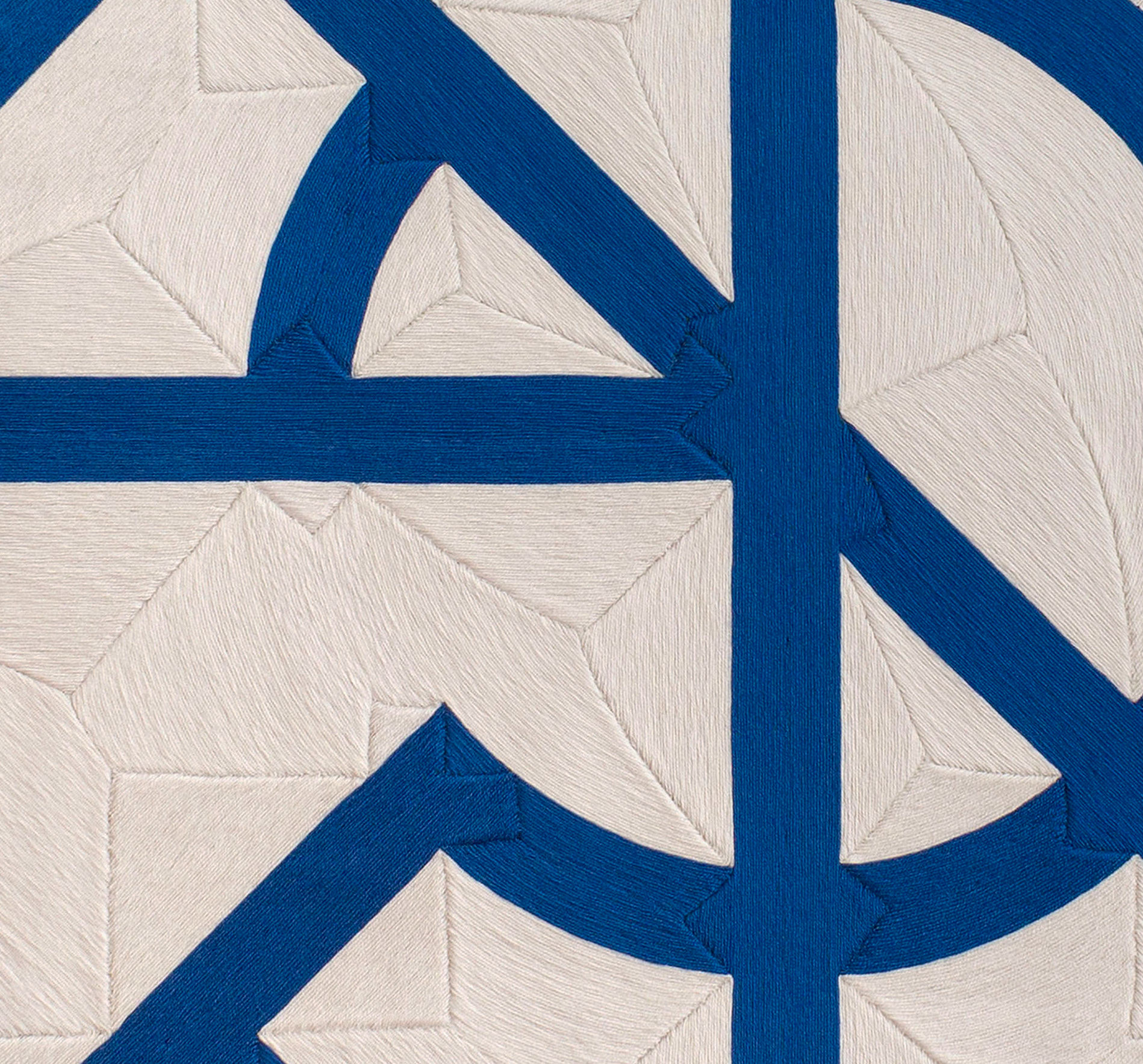 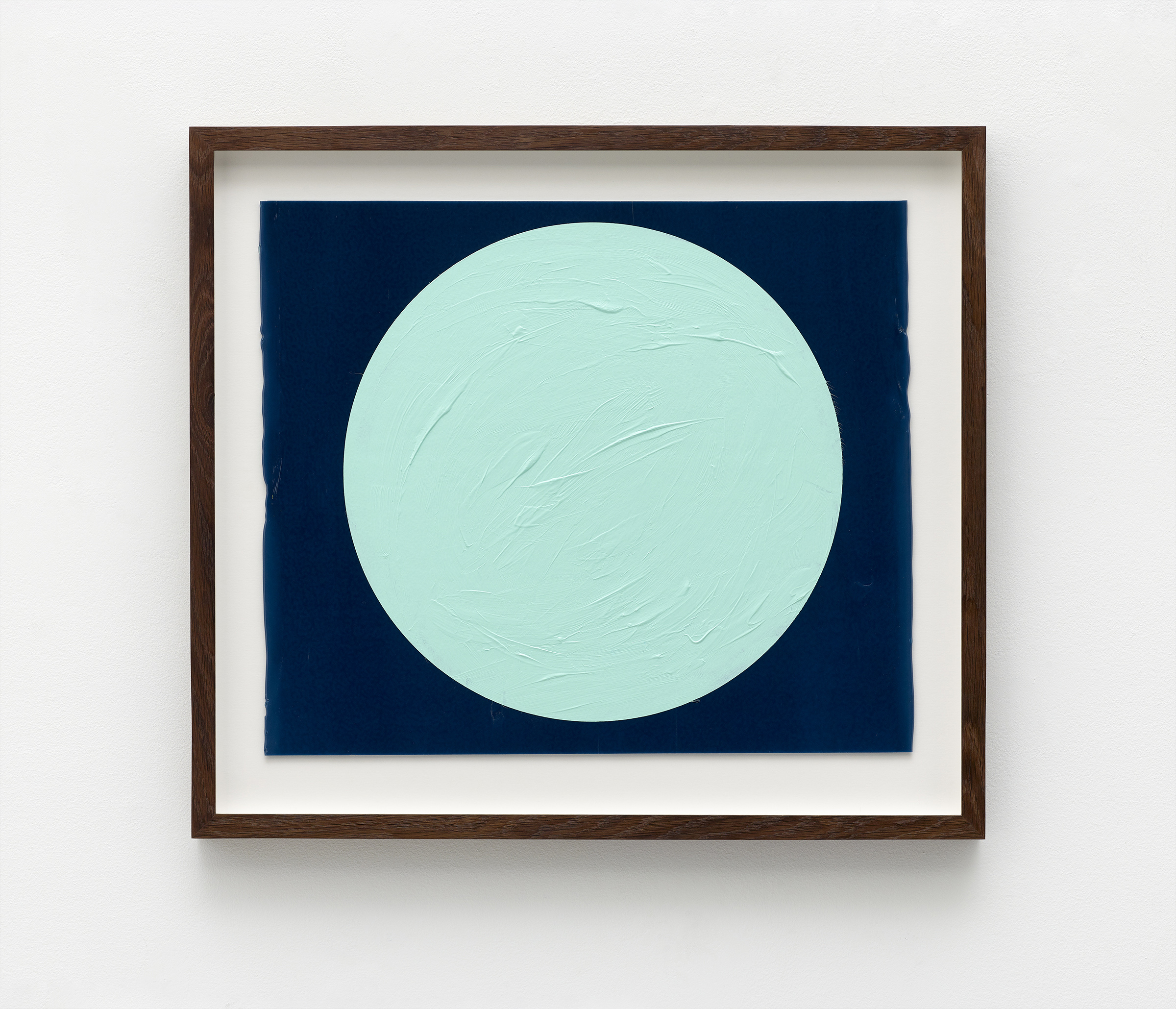 Mads Gamdrup works with the potential of monochromatic in photography and glassworks and its strength as artistic statement in relation to a number of phenomena, such as distance, transparency, spirituality and materiality. Gamdrup explores the boundaries and possibilities of a color using Newton’s and Goethe's colour theories. In this new series of works Gamdrup has replaced the photographic medium with acrylic paint on hand-rolled glass. The abstract appearance in this series as well as in his photographic works resemble monochromatic paintings⁠. 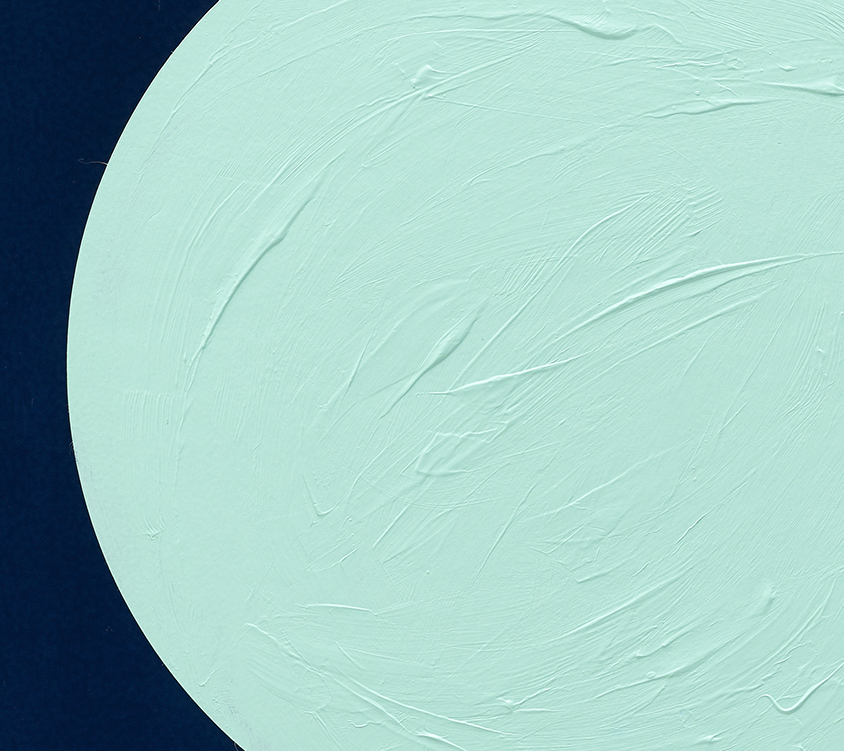