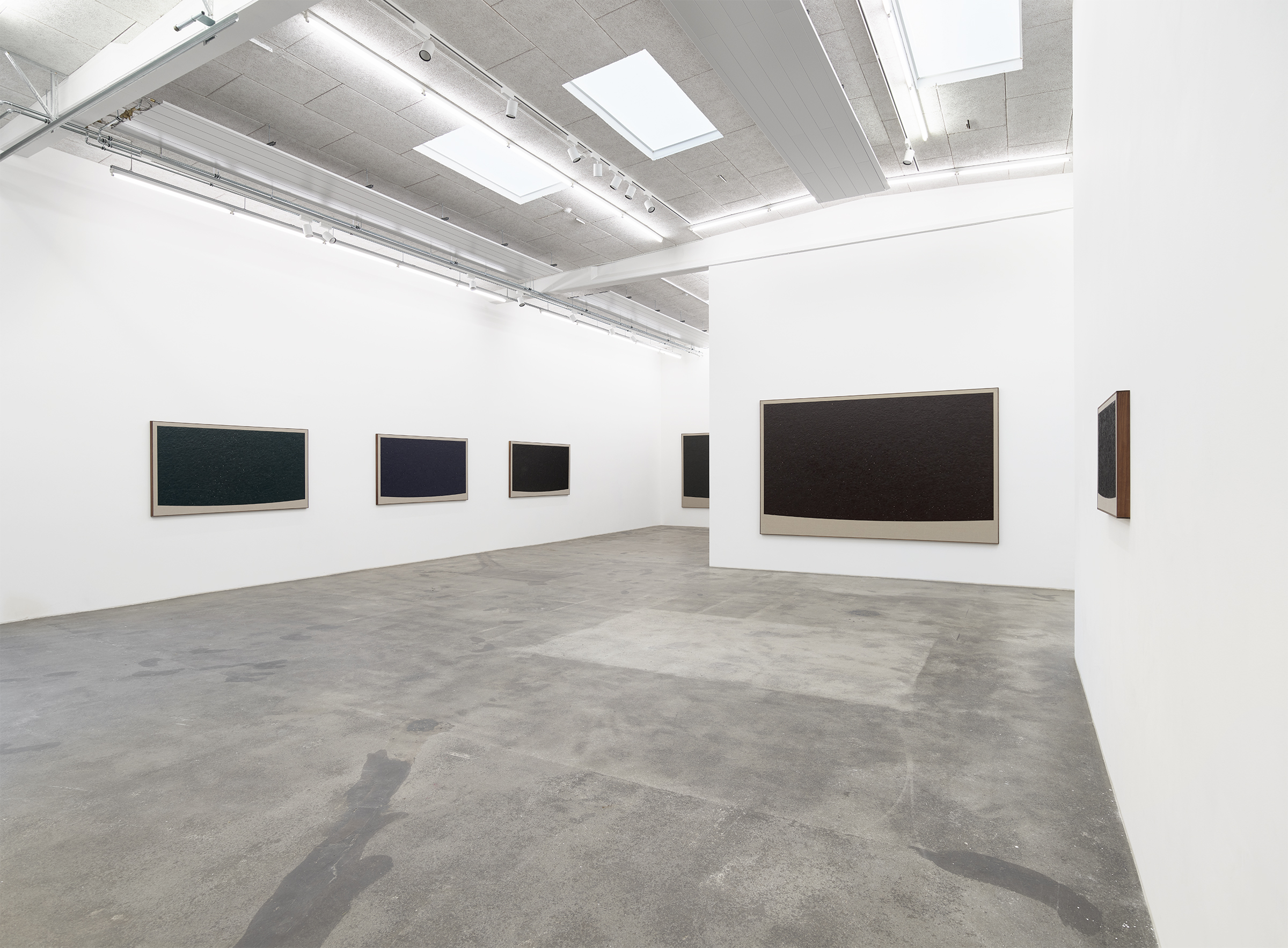 Approximately one year before the first moon landing, Stanley Kubrick’s cinematic landmark 2001: A Space Odyssey was released. It has since been celebrated for its scientifically accurate depiction of space flight and its ambiguous imagery, which remains an open source of philosophical interpretation. In fact, much of the imagined technology and sleek minimal aesthetics presented in Kubrick’s film bear an uncanny resemblance to today’s standard inventory of communication devices. ⁠In the first part of the iconic Blue Danube Waltz scene, the film presents us, for the first time, with an image of what the universe might be like: an infinite, blueish-black against a glowing white, outlining planets seen from shifting perspectives – a complex journey through outer space that seems both abstract and realistic at the same time. ⁠Visually, Kubrick’s scene resembles the paintings in Paul Fägerskiöld’s exhibition January 1, 2100. In addition to the striking similarity of the numerical sequences in both titles, they both present us with possible images of our collective future. ⁠

Paul Fägerskiöld’s paintings remain open, pointing towards the unpredictable. Symbolically speaking, they contemplate the link between the earth, celestial light and life force by the very act of representing physical nature. They resemble a reversed archaeology, as if we are finding something of value just beneath our feet. Like a time capsule, the process may be physical, or something is hidden within layers of memory. Or it may exist in the realm of imagination.

While the compositions appear abstract, without an end or a beginning, the titles are quite accurate locations across the globe. Using the computer software ‘Starry Night’, Fägerskiöld constructs his views of the cosmos. As the exhibition title suggests, the programme calculates views from any location on Earth and nearby galaxies at any date for thousands of years in the past, present and future. Through simple means, the paintings suggest perspectives, making them readable as encapsulated spacescapes. But when we scrutinise them up close, their seemingly uniform surfaces reveal the countless layers of colours underneath. It is, after all, the absence of light that makes the universe appear infinitely dark.

We are proud to present a conversation between Paul Fägerskiöld and Kasper Obstrup, researcher and writer specializing in hybrids of art/literature, occultism, and radical points as counter-culture

The Swedish playwright August Strindberg is less known for his intense periods of dedication to painting and photography in the 1890s. In an essay from 1894, ‘Chance in Artistic Creation’, he describes methods he employs, describing his wish to imitate nature’s way of creating. His text later proved to be surprisingly predictive, capturing the automation techniques of the twentieth century. His method involved starting randomly, trusting nature’s inherent desire for form, with the picture finally evolving out of the paint, almost by itself. Like Fägerskiöld’s tactile imagery, Strindberg emphasized the painting surface with such passion that not only does it provide an image of nature, it almost gives the impression of being nature: seascapes or landscapes half-embedded in the material, like a world in the process of being created. In terms of painting, the surface becomes fractural, resembling the texture of the earth. Fägerskiöld does not paint specific nature – his paintings are nature as behaviour. No colour is just one colour. There is always a shadow and nuances. Its materiality and texture are always active, never just monochrome or flat. That is the true nature of painting.

Strindberg’s ‘Celestographs’, with their weathered surfaces, also seem to be in physical alliance with nature. Strindberg’s experiments were quite direct interactions between technology and nature. He would place a photographic plate in the window, exposing it to the starry sky. His photographs actually look like celestial scenes. But you could just as easily see dust or a fragment of soil. The greatness of such imagery, whether in film, photography or painting, lies in offering this double vision, where the starry night and material matter connect and the microcosmos and macro cosmos affect us viscerally. In fact, science today believes that to be true. Stars are formed equally by dust and gas, born in places called nebulae. Over time, due to gravity, and through a process best described as fusion, the nebula collapses to form a nucleus, and that is how, in the midst of a cosmic spark, stars are born. From an unearthly perspective, this also means that we are actually made from stardust.

The term ‘birth’ is often used as a descriptive way of grasping a natural process so immense that it really is ungraspable. Nature has that effect on humans. Conceiving ‘landscape’ painting in the age of the Anthropocene recognises that to be really truthful representation must incorporate our behaviour and language. Rooted in the famous phrase attributed to the Greek philosopher Protagoras from 6th century BC, ‘the measure of all things’ refers to a similar anthropogenic notion of the world. This would later become the Latin phrase ‘homo mensura’ meaning man is the measure of all things, implying that humans use themselves as benchmarks for understanding the world. Fägerskiöld’s paintings of future starry-night skies above us eliminate discussions about true or false.

We perceive neither a ‘true’ nor a naturalistic imagery from the surfaces of the paintings. Instead, the image spaces open outwards, connecting with the physical space where we, the viewers, are placed. We let go of that specific imagery we try to maintain from the image. Instead, our minds start to wander off into the landscapes of the future: looking southwest in the year 2100 at Lagos, Nigeria, predicted to be the biggest city in the world by then. Or perhaps looking north on 1 January 2100 at Copenhagen. Will we still be here by then? Will our children be here – will they even perceive our world in the same way? Leaving us with such questions, the exhibition space morphs into something else. Like a time machine, the paintings reconnect us with our own position in life. That is what makes them so believable.