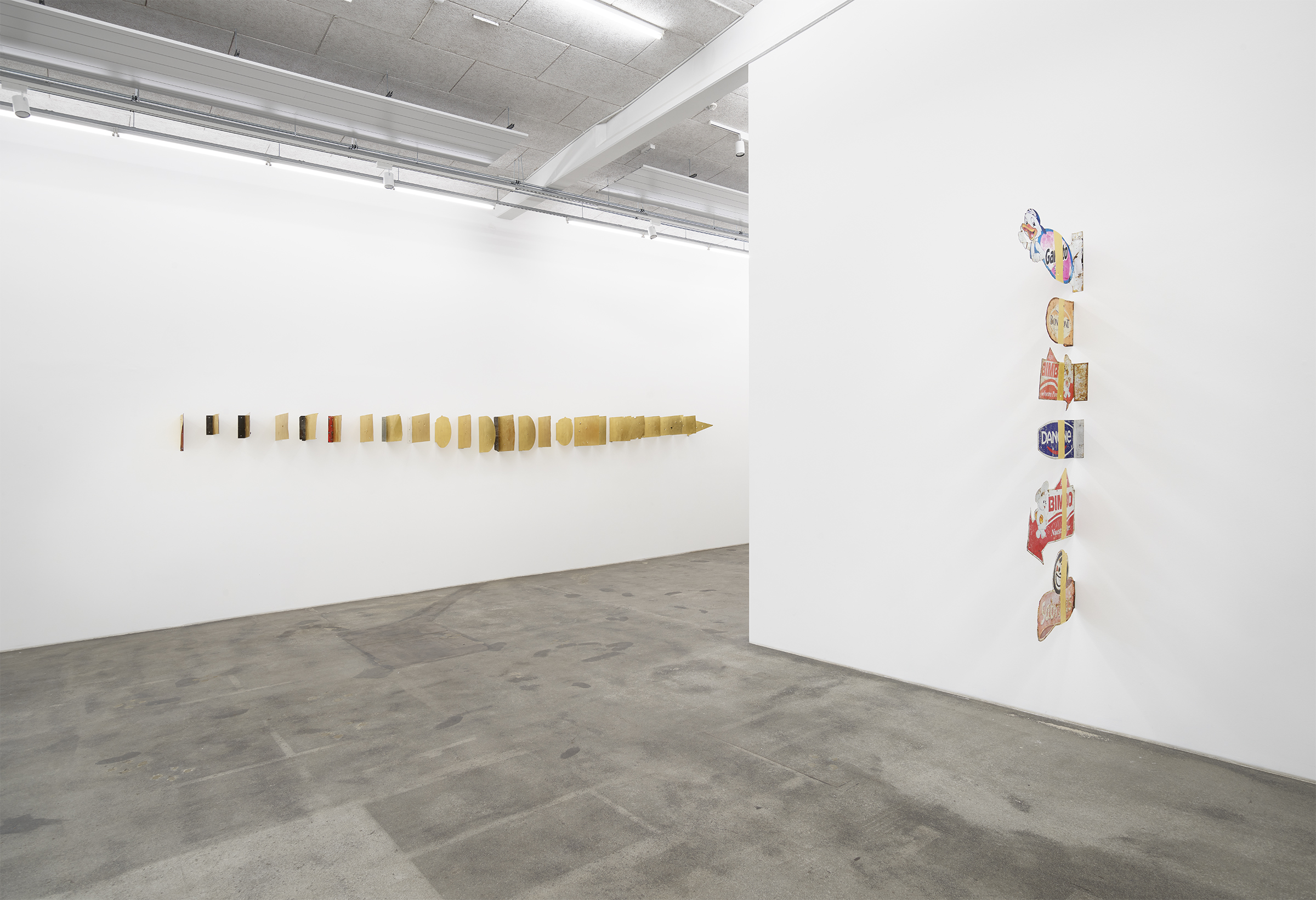 We are pleased to present Darío Escobar's 3rd solo exhibition at NILS STÆRK.

Encrypted Messages investigates the counterbalance between signs of consumerism and religion in modern history.

The exhibition features two series of works based on found objects. Juxtaposing societal polar opposites, the artist will fill the gallery space with signs collected from roads in eastern Guatemala and southern Mexico, alongside clusters of various paraphernalia from the world of sport. By altering each object, using the historical Baroque technique of applying gold leaf to the surface of an object, the artist reveals the many similarities between sport and religion, both in Latin America and throughout the world. Athletes have become role models for young people, representing as they do a dream of upward mobility. In their eyes, the objects used in sport assume the significance of sacred relics.

As a form of intimidation or by way of pastime, gunshots have perforated the street signs. Initially, the bullet holes come across as representations of violence. However, Escobar seeks to rethink the message of the found object, regarding the perforations as encoded messages – signs that we cannot read, but only approach more tangibly. While these bullet holes may represent the threats of everyday life, Escobar challenges our understanding of the statements with his application of a golden surface. The artist adds a reflective side to the object, thereby overwriting its original message. The language of the objects also shifts from reading to understanding. In this simple, yet powerful gesture, he transforms the holes into more abstract emblems, compelling his audience to view the world in a different light.

In Hippias Major, one of Plato's famed dialogues, Socrates asks Hippias what beauty is for him: a beautiful woman, gold whose overlay makes everything beautiful, wealth and respect, burying one's parents and being buried by one's children, are the criteria proposed by Hippias. Socrates refutes this definition. In his opinion, what is beautiful is what is appropriate and useful, without excluding the pleasures of seeing and hearing.
Beauty is not really up for debate in the artistic field today, but Dario Escobar nonetheless adopts Hippias' assertion that gold would make people love any form it covers. Like the art world in general, though, the Guatemalan artist sidesteps any hypothetical issue of good and bad taste as he sets about applying gold leaf to specific parts of meticulously chosen secondhand objects.

These objects, some of them enhanced with a precious metal considered incorruptible and exceptionally malleable, are those of industrially manufactured items that Escobar has been working on and modifying for almost twenty-five years. Most come from the world of leisure: balls of all kinds, bats, rackets, skateboards, surfboards, and billiard cues are reshaped and converted into sculptures. The application of gold to these bats and balls effectively turns them into trophies given a second lease of life via a romantic urge to retain and preserve things usually discarded once deteriorated or obsolete. Gold functions here as a barrier to oblivion and the programmed elimination of items that have had their day and which the market hastens to replace with others, brand new and often identical. A priori stainless, gold stops time and its inexorable entropic march. Transformed by this gilt addition, Escobar's artefacts are frozen in hieratic immobility heedless of the heinous crime of ornamentation denounced by Adolf Loos early in the last century. Transcending the visual reassurance of a presence prolonged by this golden aggregation, the preciously timeless undecidability of the meaning of these works remains intact.

The resort to precious materials, particularly gold leaf, in recent years by quite a number of living artists makes us stop and think. We all remember the golden calf worshipped by the people of Israel freshly escaped from Egypt in Cecil B. DeMille's The Ten Commandments (1956). Moses, after having taken great pains to save his people from the yoke of Pharaoh, sets off to receive from the Almighty the famous tablets of the law and their rules for a sinless, piously resigned life. On his return, he finds an orgy in full swing with, at its centre, this priceless sculpture, a trivialized representation of each newly free individual's vision of oblivion: instant possession and gratification. And who cares when possession's the name of the game! We may never actually have left it, but the time of the expensive idol follows its course, hallowing triumphant capital and its faith in the glistening and the costly. Escobar is obviously not the only one to invest his creations with materials considered precious. After years of making art out of waste, since 2006 Mexican artist Gabriel Orozco has been working on Samurai Tree, an extensive series of paintings partly composed of gold leaf. Each of his gleaming trees is given a number and a letter, and this army of samurais is dispatched to conquer the market! One also remembers the never-to-be-outdone Englishman Damien Hirst who, some fifteen years ago, sold a vanitas composed of 6801 diamonds mounted on a platinum skull for 74.4 million euros. The artistic production of the moment is a reflection of its time. An affabulator named Marcel Duchamp declared at the beginning of the sixties, during an interview with Georges Charbonnier, that in his opinion, a work of art had no price. Robert Smithson, running into the same Duchamp in the Cordier-Ekstrom Gallery in New York in 1963, asked him if he practiced alchemy. And the inventor of the readymade admitted that he did. Have times really changed that much? Might the art object have so definitively lost its mana that it now has to requisition the symbols of wealth that are gold, precious stones and other expensive avatars to support the illusion of its power or the power of its illusion? More prosaically, might artists have grown weary of alchemy and collectors leery of so-called popular or even too ordinary materials? A native of a country whose economic system relies largely on recycling, and at the same time well acquainted with the trends and tenets of the art world, Dario Escobar provides obsolete objects with a – homoeopathic – dose of gold, thus saving them from abandonment with a poetic, romantic gesture.

In recent years Escobar has seized upon a category of objects not rooted in the realm of entertainment. His encrypted messages indiscriminately take over advertising and road signs, as well as simple advertisements for professional services. The rudimentary supports for this miscellany are metal plaques riddled with bullet holes; as a rule, set at visible height along the roads near the points of sale of the promoted products and the stalls where the announced services are dispensed, they are to be seen in urban and rural public spaces everywhere. We still come across a lot of these gregarious advertisements in the most remote corners of the world. Since 2019 Escobar has been collecting these advertising relics, mostly well rusted, in eastern Guatemala and the south of Mexico. Once reclaimed and reworked, they are exposed on the walls of exhibition rooms just as they were, previously, in the great outdoors: a fresh migration from the street to the mausoleum of the kind Latin American artists, among others, are so gifted for. Escobar puts together sets that he hangs in a line, column or cloud. Here a Spanish-language Stop sign "ALTO" ("Halt" but also “High” in English translation) is displayed alone and higher than the others, with half of both its front and back gilded. When the signs are presented in a group, Escobar points them all in the same direction in an orderly parade. Hung like this, they deliver a strange polyphonic message frontally, while the reverse, entirely covered with gold leaf, offers the viewer the vision of a fragmented but flawless three-dimensional gold monochrome. The contrast between the worn, garrulous fronts and their pristine backs is striking: two works in one. The perforations in these signs come in some cases from stray bullets, but just as often from shots deliberately fired to intimidate and hold recalcitrant merchants to ransom. These encrypted messages were inspired by those made in the 1960s by Mathias Goeritz. The golden messages of the German-born artist living in Mexico are also made of perforated metal plates and were themselves inspired by the works of Heinz Mack, founder with Otto Piene of Zero in 1957. Goeritz became aware of Mack's work during a visit to Düsseldorf in the late 1950s.

Dario Escobar sees his work as a reflection on the economic and sociological dynamics that underlie our behavior. Trained as an architect, and a geometry enthusiast into the bargain, he makes the most of a deep knowledge of the art history with which his compositions playfully resonate.