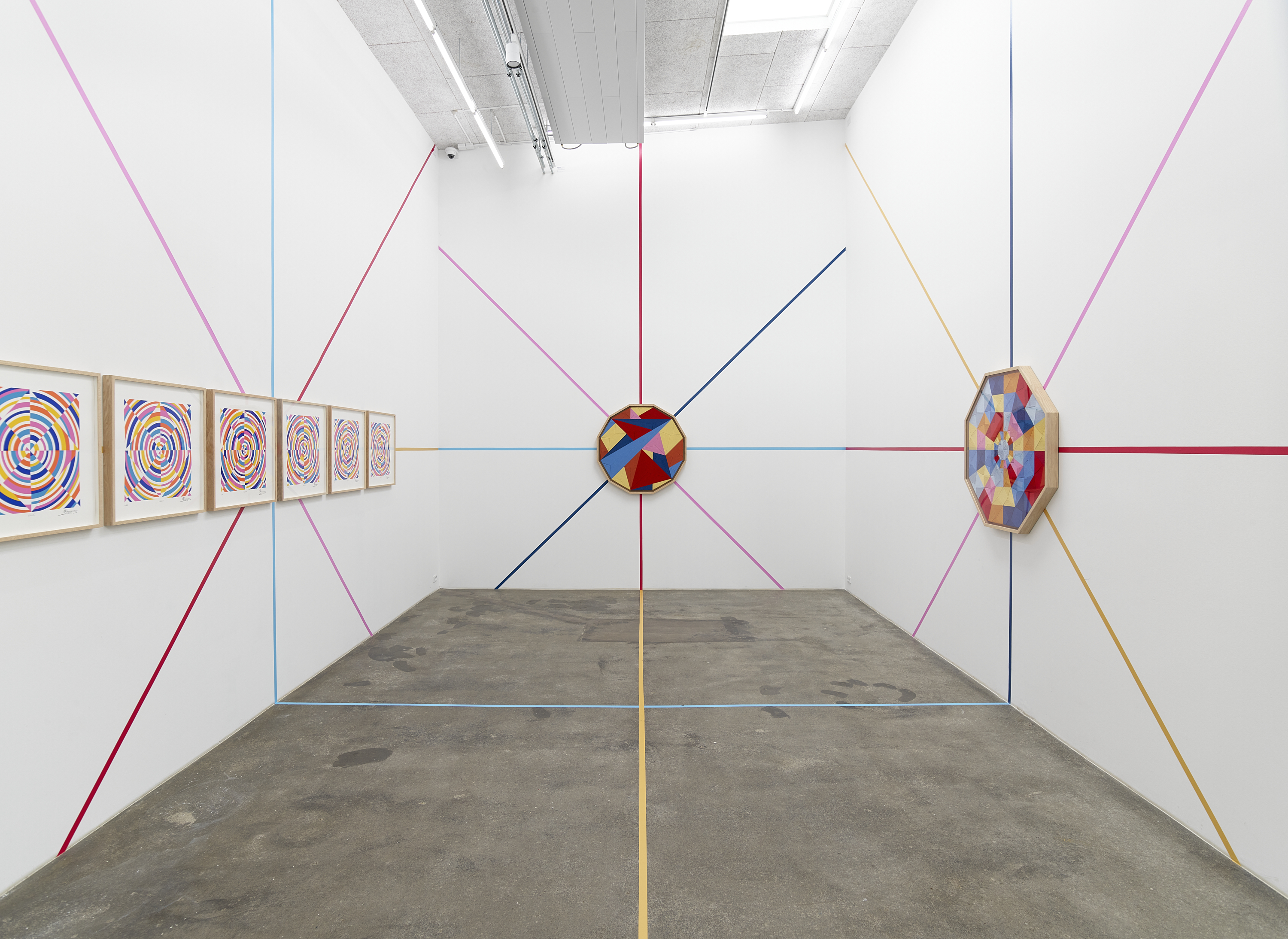 Languages for Navigating Structures - Wood, Wax and Yarn
Art manifests the desire to make tangible the organization of objects in the world within a coherent space, structured according to geometric laws.
— Philippe Descola

Just about all of us are kept busy translating what we are privileged to witness¬—life, its setting and its dramas, its joys and its ups and downs—into images visible, exchangeable and maybe mental, even if the latter are obviously trickier to share.
The artist makes a profession out of this, and representing what is beyond our scale, both spatial and temporal, stimulates his imagination and guides his hand, from cave paintings to the present day. In the case of Eduardo Terrazas it is neither more nor less than the entire universe that the artist takes on the task of containing and synthesizing in abstract geometric constructions. In a systematic, apparently limitless combinatorial game, he explores the possibilities offered by compasses, rulers, pencils, paper, acrylic paint and—wool!
Ahead of its time in many respects, his work heralds a number of research projects since carried out by younger artists. It must be said that Terrazas has been running around the world for a long time, well before artistic nomadism became a religion. He also realized early on the creative potential of the Mexican street. Inspired by what he saw and assimilated from the artistic movements of his formative years, his work was already part of what the 1960s were fomenting. If the influences of concrete art and Latin American op art are evident, he did not remain deaf to the provocative seductions of mid-sixties psychedelia, or at least adopted some of its chromatic consequences. Trained as an architect, Terrazas developed a prolific body of work by adopting, among other things, a technique invented by the Huichol, the Amerindian group whose main community lives in San Andrés Cohamiata, a village perched on a red earth plateau in the heart of the Sierra Madre Occidental. The technique in question consists in fixing colored wool onto wooden panels coated with Campeche wax, which acts as an adhesive. The thread snakes along reproducing the lines, curves, meanders and changes of direction that the chosen motif requires, covering the waxed surface in a tirelessly repeated back and forth movement during which each strand is glued tightly along the previous one without leaving any gaps or openings between them. While the Huichol use this process to represent their cosmogony and the sacred entities that animate it, Terrazas requisitions wood, wax and wool to map the universe. Although the forms are distinct—the former resolutely figurative, the latter abstract—the goal in both cases is the same: to reveal and share a colorfully singular pictorial version of their respective world views.
Under the generic title of Possibilities of a Structure, maverick structuralist Terrazas bends wool to the whims of curves interspersed with verticals and horizontals, of medians that cleave circles and squares, or stop short to let rhombuses, triangles and other eccentric geometric shapes unfold freely within squares rarely exceeding 120 centimeters on a side. The original structure, perfectly symmetrical, serves as a matrix for hundreds of variations that Terrazas describes as cosmic. A generous, fantastic range of colors fuels and enriches the exercise by enabling the emergence of polychrome asymmetries offering infinite cadastral solutions.
These Possibilities of a Structure recently experienced a kind of epiphany when Hans Ulrich Obrist, who needs no introduction, brought together Eduardo Terrazas and Marcus du Sautoy. The encounters between artist and mathematician gave rise to moments of collaborative creativity during which du Sautoy explicitly recognized and named each area of the original structure at the center of which he situates the earth: while the celestial dome occupies the periphery, four essential forces respectively qualified as gravitational, electromagnetic, strong nuclear and weak nuclear, compete for the space in between.
For this exhibition the artist, armed with this precise, informed interpretation of his structure, has taken some liberties, notably abandoning the square in order to invent new cosmic variations set this time in less usual geometric figures such as the triangle, octagon and dodecagon. Certain compositions claiming to be from the Cosmos series, together with a group of four serigraphs linked to the original structure, accompany these innovations. The overall geometric organization, which remains faithful to the square, produces optical effects similar to those obtained with a kaleidoscope. Reflections and chromatic recurrences transform these arrangements into targets whose dominant concentric circles are fragmented by abrupt changes of color.
I have mentioned elsewhere the desire for a third dimension one senses in certain two-dimensional works whose motifs strain and jostle the surface. One thinks of the early paintings of the heroine of the Brazilian neo-concrete, the marvelous Lygia Clark. What Terrazas achieves through the construction contained in this single dodecagon is exceptional and of the same order. The reversals and interplay of clashing perspectives that develop within it give one the impression of being confronted with an unknown rock crystal, a new enigma of the upside down in which the intertwining of volumes defies understanding, leaving one perplexed and delighted.
A coincidental coming together of calendars sees this text born in a place where we probe the famous cosmos to which Terrazas dedicates his time, his ideas and most of his creative work: according to the experts, the Astronomical Observatory of the UNAM (National Autonomous University of Mexico), located in San Pedro Martir in Baja California, is today, after Hawaii and the Canary Islands, the best place on earth from which to scrutinize the universe.
— Michel Blancsubé
Baja California, May 2022
English translation: John Tittensor
. .