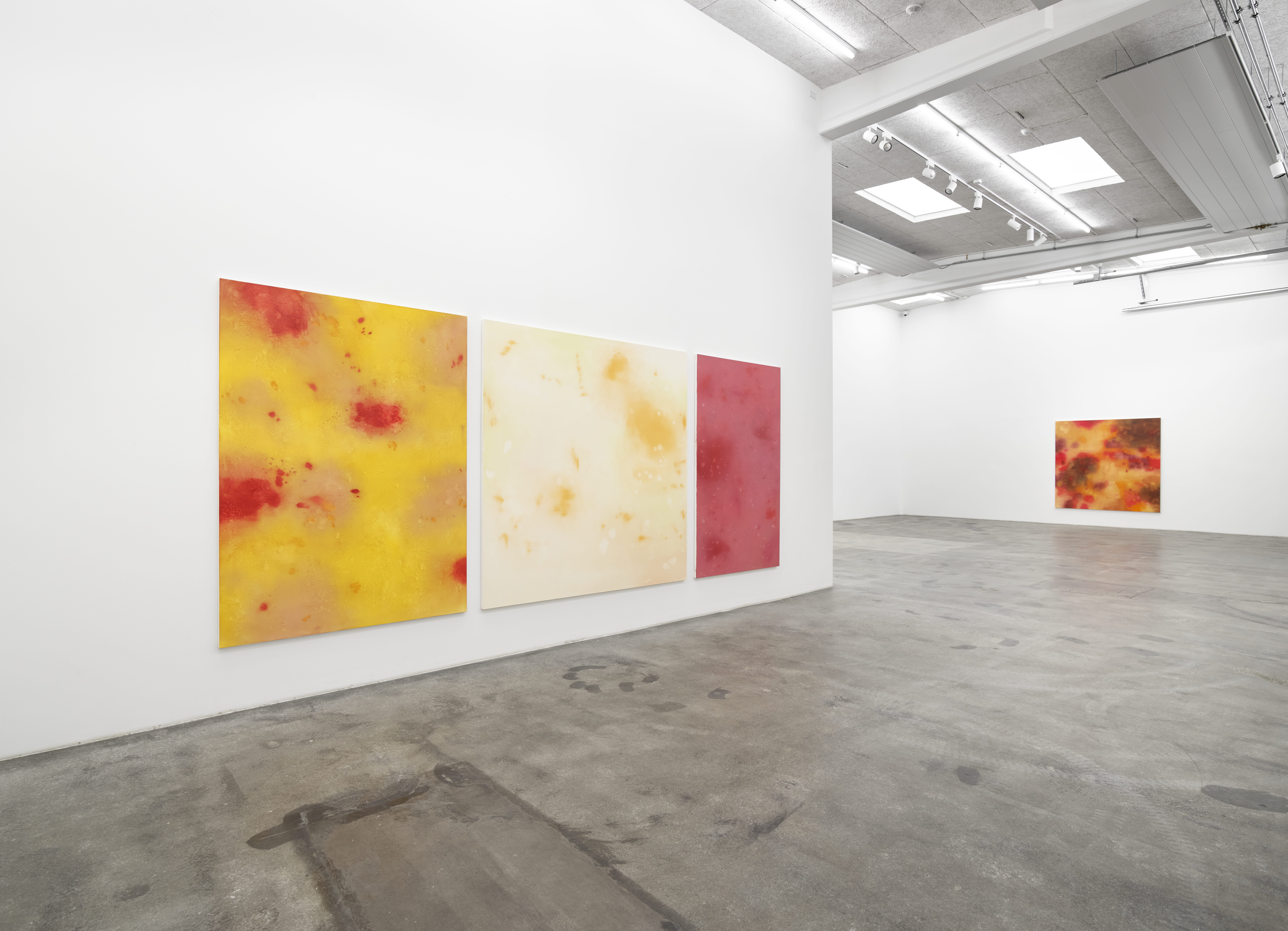 It is our pleasure to present Rebecca Lindsmyr’s first solo exhibition at NILS STÆRK.

Rebecca Lindsmyr’s work explores the intensity of painterly representation. Acting within the medium of painting, the exhibition travels from seemingly abstract colors and textures to a glossy representation of a singular popsicle. Free of conventions, Lindsmyr presents a myriad of perspectives shifting between states of the macro and the micro, blurring the lines between figuration and abstraction.

One could argue that abstraction lies in between a state of becoming and remaining. This also extends to our own position as viewer. Going from canvas to canvas, our bodies perform a similar gesture of moving in and out of focus. Some works even feel as though they are mirroring the different states that we physically move between, peering directly into our own bodily presence. These shifts in perspectives explore the glitches within static definitions and confronts one’s own experience of bodily presence with a sense of intimacy, sensuality, discomfort, and disgust. Feelings that the embodied self and the painting structurally can be argued to share.

Rebecca Lindsmyr (b. 1990, Sweden) graduated with an MFA from Malmö Art Academy, Sweden, in 2021, and previously holds a BA from Glasgow School of Art.

Contrary to what enters the mouth and nourishes, what goes out of the body, out of its pores and openings, points to the infinitude of the body proper and gives rise to abjection.[1]


In her writings on abjection, Julia Kristeva puts forth a position of the abject proposed neither as being an object, nor subject. The experience of abjection, however, must be seen as central to the subject’s crafting of selfhood. The formation of ‘I’ occurs through a continuous process of actively distancing and separating the self from the other. A process of othering that is at the core of abject experience. In the introduction to Powers of Horror, Kristeva finds an example in the sensation of acute disgust she experiences in her lips meeting the skin formed on the surface of warm milk. The appalling nature of this new, animate materiality generates a rupture with the knowledge of milk’s potential nourishment: that skin on the surface of milk – harmless, thin as a sheet of cigarette paper […] and, still further down, spasms in the stomach, the belly; and the organs shrivel up the body.[2]

This confrontation with the delicacy of one’s own material being, is from where A Mouthful could be seen to unfold. It is grasped at through tracing the imprint of a child’s encounter with the visual material of a medical lexicon used for classifying infections of the skin – reanimated through painterly processing. Suggested is a possible miming situated between the materiality of paint and that of the body. Lindsmyr’s approach in seeking out the affective and psychological event of abjection, is something meticulously manufactured. An effect perhaps more implosive, than explosive, akin to the example of Kristeva’s food-loathing, where the capacity of the abject to invoke intense disruption acts on a seemingly minute scale.

(The) infection confronts us with an otherness at the threshold of our own body. Without chasing a holistic, or animistic point of view, it can be said to offer up a state of ‘amplified cohabitation’, proposing a heightened (self)awareness of body as undeniably shared and fluid territory.

Donatella Di Cesare’s recent writings, published in the wake of a (still ongoing) global pandemic, probes the spilling and overflowing body as it is shuffled through an ever more omnipresent biopolitical machinery enforced by present-day capitalist societies[3]. Measures that may appear, at first glance, as taking place on the surface (such as infrared cameras using the measurement of temperature on the skin in an attempt to determine if an individual harbors an ongoing, or oncoming infection), will always be a transaction moving from the inside out. Rendering bodies increasingly transparent to systems of surveillance and control.

Through the series Untitled (Plansch #) a painterly method of infiltration is set out, as if to corrode its own material. Eating holes into or out of previous layers; overwriting cells, the messages, or codes of transmission. Acts of intrusion are carried out in several ways. A sequence of abstract paintings, rendered in an illusory, almost photographic quality, occurs as punctured by a singular act of figuration; dismantling conventions of figuration and abstraction as representing opposing attitudes to image construction.

A mouthful, or a mouth filled; cheeks inflate to the brim with potential excess. Teeth clenched at the point of leaking. Words or matter? The linguistic mouthful will, by a twist of the tongue, challenge the limits of oral muscles to take complete hold of a sentence. A chunk of syllables bit from the edge of a fully formed language.

In one of her ongoing series of paintings, Allison Katz presents a visual domain as seen from the vantage point of a wide-open mouth. An inverted perspective colliding the gazing in with the gazing out, suggesting a mouth acting as threshold as well as stage. In the review of a recent presentation of Katz’s at the Camden Art Centre, writer Brian Dillon refers to the works as ‘epiglottal perspectives’[4]. Implying a smallness of the viewer – a spectator, an audience, or an artist, adapting to the limited aperture between two rows of teeth – this internal position provokes historical renditions of a subject limited to the confines of the (inside)body. The epiglottis, which here functions as anchor, is fundamental for carrying out any kinds of voicing, or speech, but also, needs to remain completely sealed, in order for one not to choke on food or liquid.

Lindsmyr’s exhibition sees a figure of the mouth that is double-sided, both on the level of language and image. It plays with ideas of consumption, not only in the contours of a body having lost its form, but also in the slightly vulgar presence of an oversized popsicle. From the position of a miniaturized and partially internal spectator, this would indeed be a literal mouthful. This way of the double alludes to a certain linguistics of self-devourment. As, already in the etymology of the object, one finds the mechanisms of its self-consumption, lolly being another word for tongue.

The title Mère de Glace[5] makes reference to a chapter in Luce Irigaray’s landmark publication Speculum of the Other Woman. Appropriating the writing (and hence: language) of the Greek philosopher Plotinus, in a bid to subvert a discourse on matter which strictly dictates the gendering of bodies, Irigaray performs a deconstruction through the direct hijacking of authorship. The reference to this essay seems to lead us further towards a psychoanalytic relation to the ordering of language. Following this line of thought, the suggestively phallic appearance of the popsicle will play with the established understanding of the phallus as being the possessor of language and power. In its painted state of perpetual solidity, the popsicle also acts in lieu of the body; of the smooth and impenetrable surface of the ‘porcelain skin’ in much classical figuration. This conceptual abstraction – while suggesting an ailment to our symptoms – not only undermines any attempts at categorizing the artist’s position as ‘abstract painter’, but also pressures the porosity of such a position in the first place. The resulting juxtaposition is one that seemingly echoes Kristeva’s idea(s) of the abject in-between; a violent ambiguity that respects no borders or fixed positions.

As in the case of digital code, where different applications of syntax may be used to determine an argument to be valid either within the system as a whole, or simply within the confines of its locality, the layout of the exhibition seems to claim that figuration might here be the actual abstraction. The composition adheres to a breaking down, and rearranging of its own logic. Inserting a glitch to actively dim the distinction between abstract and figurative.

As a viewer stepping into the gallery, one is found bouncing between micro and macro. A pulse of seduction and aversion. Drawn closer to the abstract (close-up), only to be confronted with what is expelled. Just as one steps back from figuration only to fully see, and to face, an object destined to enter.